Curious about the team behind this awesome capsule-themed game? Here we are:

As Producer, Pat, also known as Rowan, overlooked the development process to ensure the game came together in a unified whole. He created all of the art for the mini-games and updated the game’s social media pages.

Yuka created the artistic look and feel of the game as a whole and created all of the art outside of mini-games, including the variety of capsule toys to collect. She designed the UI and created the game’s trailer.

Aaron did a bulk of the programming work outside of the mini-games, including the main menu and extras menu. He also did peer reviews of the code by other programmers to ensure the game would work well together.

As Build Manager, Owen made builds of the game and used testing and Splyt Analytics to find areas to continue work on. He also helped with programming various areas of the game and made a few mini-games.

Oliver worked on a bulk of the mini-games, including design and difficulty. He also worked on mini-game balancing, difficulty over time, and mini-game shuffling.

Along with several mini-games, Hannah helped design and did the programming for the tutorial segment. Additionally, she designed the game’s unifying capsule theme and programmed the audio manager for the game.

Renzo created every sound in Many Mini Things; he composed the music and created the large variety of sound effects that makes each mini-game, menu, and capsule prize sound distinct. 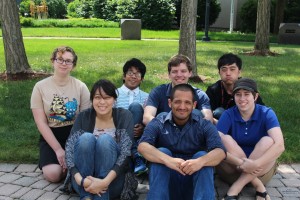